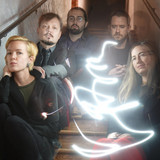 After the triumphant Zen Diagram, Kansas City art-rock combo Monta At Odds return to the spaceways with the single “When Stars Grow Old.” Taken from the forthcoming album Peak of Eternal Light, it’s an android of a song, combining the human and the electronic into a sizzling new sonic creation. “When Stars Grow Old” is the sound of humanity visiting new worlds across the dark spaces of time, reconstructing the beat of music through memory and instinct. An ad hoc band plays to the sparkling, unfamiliar sky of a distant world. It’s the music of the future if formed from ghostly, discarded impressions of the past. Let Monta At Odds be your guide. Conceptual Kansas City art-rock combo Monta At Odds continue their experimentation in sound with an expanded line-up and a new EP, Zen Diagram. Led by Dedric Moore and fueled from 2020’s angst and uncertainty, the band adopts a darker, grittier direction that coincides with a post-punk indulgence. The result is an evocative four-song tableau, showcasing the veteran project’s drive to explore sonic territory as they lay down some mesmerizing jams. Monta At Odds embraces the grayer shades of these sessions with a faithful but otherworldly cover of “The Movement of Fear,” the classic cut from Tones On Tail. The result is multi-textured and dubbed-out, exposing the bloodline of Monta’s aesthetic.