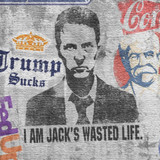 A mix of polished indie rock and alternative electronica, UK based 5-piece, formed up around singer/songwriter Andy Williams in 2012.

Williams, having written and recorded the solo album `Into The Great Unknown` in 2010/11, and after a positive reception (especially for anthemic lead track `Rule Britannia (Britain going through a midlife crisis?)`, sought to put together a band to perform the record live. Previous bandmates Doug Thrower (The Baggys) and Pete Beddoes (Trace), joined on keyboards and drums respectively, quickly followed by Chris Gwilliam and Phil Murray on bass and lead guitar. Beddoes left in 2013 to rejoin The Lasting Days and was replaced by Andy Duffield, which lead to a more sample/electronic based live show, also reflected in the second studio album `A Dozen Wicked Words`, released 2015.