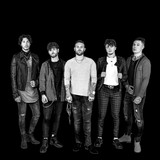 Since 2008, Asking Alexandria has established a world of rock music that is completely their own. Now, over a BILLION streams later, and with a new label behind them - the U.K-based rock group are readying their next chapter. Ben Bruce [guitar, backing vocals], Danny Worsnop [lead vocals], James Cassells [drums], Cameron Liddell [guitar], and Sam Bettley [bass] have arrived at a place of clarity and refreshed sense of artistic purpose. Early 2021, the band found themselves hunkered down in a house in Franklin, TN, to write and record their 7th studio album. It was the first time in over a decade that all were together in the same studio. Armed with a new sense of dedication to themselves and to their fans, they went back to their roots and pulled inspiration from some of their earliest influences - Led Zeppelin, Metallica, AC/DC, Queen. With no gimmicks or cheap tricks to fall back on and a renewed appetite for writing together, they fell in love again, with music and with each other as bandmates.

The result of this reflection and renewed creative energy is the band’s most cohesive and self-assured record to date. The first single, the poignantly powerful and guitar-driven “Alone Again” is a fitting first offering of the sonic journey on which the world is about to join them. But beyond its moving lyrics and soaring melodies, it is a rallying cry and a statement of a group of artists who are here to stay and ready more than ever to be heard.