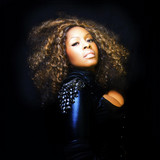 Ultra Naté. She reps hard for Baltimore, Maryland and is a world renown singer, songwriter, DJ, producer, label owner and promoter. She has released nine studio LPs [1990-2017] and travels the globe performing and spinning live for a variety of audiences. Concedes Ultra, “I've been writing my own songs since the beginning of my career. This was pivotal in establishing me as an artist with a distinct style all my own. I was one of the first artists in dance music signed to a major record deal with Warner Brothers in the UK in 1989 and I have more than 25 years of experience making groundbreaking music - having collaborated with a wide array of artists such as: The Basement Boys, Nellee Hooper, D-Influence, Mood II Swing, Nona Hendryx, Lenny Kravitz, Frankie Kuckles, N'Dea Davenport, NERVO, StoneBridge, Todd Terry, David Morales, Michele Williams (of Destiny's Child), Boy George, 4 Hero, Deee-lite, Masters at Work, Roger Sanchez, Quentin Harris and others!” In Ultra’s nearly three decades of making music, she has remained a musical chameleon, embracing a variety of sounds and genres including house, soul, disco, electro pop, R&B/hiphop and rock. Named one of Billboard Magazine’s "Greatest of All Time" Top Dance Artists (#12) along with

three entries in the industry bible’s respective “Greatest Of All Time” Top 10 Dance Club Songs including the platinum-selling #1 anthem, “Free.” Ultra Naté, your original 'party girl’ keeps bringing the party back to you.