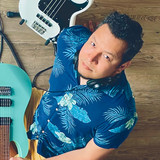 ¡Hola! Ber here. I'm a guitarist and music maker established in The Netherlands since 2013, originally from Venezuela with Colombian roots. I’m producing music from my home studio in Amsterdam. I try to be in a constant cycle of learning, creating, and sharing. Learn, create, share, repeat. In June 2021, I released my first instrumental song “Canals”, which was the first piece of music I wrote after moving to Amsterdam. I released "Triple Patty", my second instrumental, on August 2021. More music is coming soon! Thank you for stopping by. Enjoy!