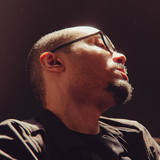 Brooklyn-based Galcher Lustwerk became one of the most hotly tipped names in the underground dance music scene during the mid-2010s. The Cleveland-born producer's tracks combine deep house beats with his own subtle vocals often reminiscent of a more laid-back variation on late-'80s hip-house, creating a detached yet energetic take on the Midwest house sound. He is a member of the White Material collective, which was founded by cohorts DJ Richard and Young Male in 2012. Lustwerk's first vinyl release, Tape 22, appeared on the label in 2013, but it was his 100% Galcher mix of unreleased material for podcast series Blowing Up the Workshop that put him on the map among house fans. EPs Nu Day and Remixes followed on Tsuba Records in 2014. He then founded Lustwerk Music in 2015, kicking off the label with his EPs Parlay and I Neva Seen. He also released a few digital EPs of "driving music" under the aliases Road Hog, Power User, and 420. In 2016, Lustwerk released Scenes (2012-2015), a double LP by Studio OST, his side project with fellow White Material member Alvin Aronson. Lustwerk's debut full-length, Dark Bliss, appeared in 2017, and 200% Galcher followed in 2018. His latest release was released in November 2019, an album for Ghostly International titled Information.