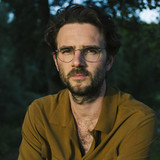 Bookings: fran@sungaterecords.com "A solitary Conforce release can never be described as predictable, with each unknown entity having the potential to take you on an emotional rollercoaster or a primal abandon" — Inverted Audio "Impeccably-crafted techno that maintains bite in its grooves even while the textures spiral into the ether." - Bleep.com Conforce is a restless producer living in Rotterdam, Holland, who is forever keen to search out new techniques, tools and sounds for the various musical projects in which he is involved. Continually flirting with a range of genres like ambient techno, techno and house on numerous EPs and LPs, he also operates in sonic territory that has no easily identifiable name. As one of the most prolific artists in the scene over the last 10 years plus, he has become an essential voice in the often crowded conversation: he is someone who always speaks clearly and captivatingly and has done so via ten full length albums and more than 20 EPs on labels like Delsin – where he has been a core artist for years – Clone, Rush Hour,2020vision, SOMA and his own label Transcendent. With this performances he focusses on musical content rather than equipment. The digital/analogue dichotomy of his productions spread into these sets, always stressing the importance of the human element without shying away from technology’s advances at the same time as marrying genuine emotional depth with dance floor compatibility. Music: conforce.bandcamp.com/