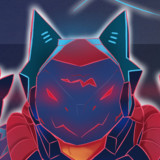 Born in Nong Khai, Thailand. Charon Faustinus is an artist who likes to create music in his free time. After He's done with his youtuber career. He decided to turn around and start making music and start Contritum Machina Records. His only own and self-released record label. In 2019 He joins Jupicraft Minecraft Server for making something called "in-game note blocks music." And He commented, "It's hard to do something good out of it when you're base on something." In 2020 He releases his Debut album call "To the Death" First half of this album is focused on his soft, ambient sounds. And the other half is Industrial, Electronic and Noise soundings. He described "This album title speaks for itself. "To the Death" mean the man has been into depression (in the first 3 tracks) It's soft and easy to listen to. and after that, It's harsh-sounding Electronic tracks. Because of his anger and fear. And it's ended with a Noise track."