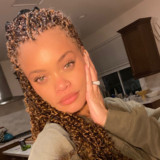 Andra Day is a powerful singer and artful songwriter who isn't merely a throwback R&B specialist; her roots in gospel, jazz, and the blues, displayed with ease and finesse, translate to the present. Cheers to the Fall (2015), her auspicious debut, cracked the Top Ten of the R&B/hip-hop and paved the way for a handful of Grammy nominations and an Academy Award nomination, with "Stand Up for Something" (2017), her contribution to the soundtrack of Marshall, earning both distinctions. Anticipation for her second proper album has continued to build with singles such as "Amen" (2018) and "Make Your Troubles Go Away" (2020). Born Cassandra Monique Batie in Edmonds, Washington, Andra Day grew up in San Diego and its metropolitan area, where she performed in church and enrolled at the School of Creative and Performing Arts. After she graduated from the school, she leaned toward contemporary R&B and pop, but was eventually drawn back to the classic jazz and soul vocalists she heard as a youngster. A major break came when a performance of hers was caught by Kai Millard Morris, who subsequently took some of Day's music to husband Stevie Wonder. The Motown legend in turn connected Day with music industry veteran Adrian Gurvitz. Allied with Gurvitz and Jeffrey Evans' Buskin label, Day built up a YouTube following and eventually signed with major-label Warner Bros. After some singles, as well as a version of "Mississippi Goddamn" contributed to Nina Revisited: A Tribute to Nina Simone, Day completed her debut album, Cheers to the Fall, for which she collaborated extensively with the likes of Gurvitz and Raphael Saadiq, among others. "Only Love" alone featured bass from Pino Palladino, drums from Questlove, scratching from DJ Jazzy Jeff, and additional support from the Dap-Kings horn section. The album, issued in August 2015, reached number 48 on the Billboard 200 (number six on the R&B/hip-hop chart). At the following Grammy ceremony, it was nominated for Best R&B Album, and Day was also among the nominees for Best R&B Performance, singled out for "Rise Up," a number 31 R&B/hip-hop single that eventually went multi-platinum. In 2016, she made her first high-profile guest appearances, offered the Merry Christmas from Andra Day EP -- featuring Stevie Wonder on a version of "Someday at Christmas" -- and contributed to The Hamilton Mixtape. The wait for Day's second proper album continued into the next decade, but the singer's profile increased in stature and spread across mediums and genres all the while. In 2017, she provided the voice for Cars 3 character Sweet Tea, and also recorded "Stand Up for Something," featuring Common, for the Marshall soundtrack. The song was nominated for an Academy Award (Best Original Song) and a Grammy (Best Song Written for Visual Media), and was also up for Performance of the Year at the CMT Music Awards. Among other soundtrack and film work, Day inched toward her follow-up with 2018's "Amen" and 2020's "Make Your Troubles Go Away," between which she was featured on songs from Sheryl Crow and Gary Clark, Jr. ~ Andy Kellman