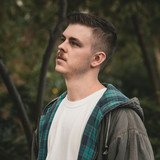 Melancholy chords, dusty soul & colourful sounds. These words best sum up Aden Russell's Liquid Drum & Bass endeavours as Artsea. Born in Brisbane, Australia and now based in Melbourne, Russell has been producing for over 11 years and DJing for over 9, and as such has strong roots in electronic dance music starting from the young age of 12. Over the years, he spent time bouncing between not only DNB, but also house, hip-hop, bass music, indie and a whole host of external influences between the underground and the mainstream. This pool of inspiration has allowed him to curate the diverse yet nuanced sound he is known for today. Aden is also responsible for the onesevenfour imprint - transforming an existing Australian/NZ Drum & Bass touring agency into an internationally recognised record label, which aims to further the scene in the pacific region and beyond. As a music production fanatic, he also helps run the electronic music production site EDMProd to help the community write better tunes and encourage people to take up the craft.