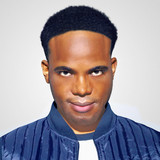 Marcellus Long is a new, up-and-coming, and much-admired American singer who began his internet music career by uploading webcam covers of pop songs. Born in Houston, Texas, he began writing songs, acting, and dancing at an early age. Inspired by the success stories of teenage performers like Usher and Justin Timberlake, Marcellus decided to pursue music on a commercial level after graduating from high school. Marcellus was accepted into Boston's world-renowned Berklee College of Music. He recorded some of his earliest demos in the Berklee recording studios. Amid his time at Berklee, Long's original music was featured on the BIRN - Berklee Internet Radio. Marcellus' dream of becoming a professional singer would later ignite a miraculous turn of events when Long went from recording webcam covers in his tiny bedroom, to the grand stage at STAPLES Center in LA after he got the attention of the Los Angeles Lakers organization. Long dropped the single "The Price of Fame" on social media, which garnered airplay on iHeartRadio's southwest market. The single was reissued in 2018 under the singer's own record label. A follow-up EP is now in the works.