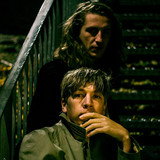 Hailing from the English village of Castleton, brothers Rory and Eoin Loveless formed Drenge (taken from the Danish word for "boys") whilst in their mid-teens. Initially with Eoin on lead guitar and vocals and Rory on drums, their raw grunge-inspired blues-pop sound was cultivated from the countryside landscape and their desire to escape from it. Their self-titled debut album was released a month after they made headlines for appearing in British Labour MP Tom Watson’s resignation letter from the Shadow Cabinet. After making their American television debut on the Late Show With David Letterman they released their second LP Undertow and toured it to festivals & headline shows across the world, playing with the likes of Wolf Alice, the Maccabees and Arctic Monkeys. Following on from their Grand Reopening Tour in early 2018, headline performances at Sŵn Festival and at Deer Shed and Truck Festival in the summer, Drenge will embark on a headline tour in spring 2019, performing at venues across the UK to coincide with the release of their third album, Strange Creatures on 22nd Feb 19.