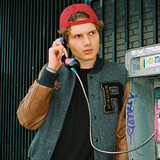 Canadian producer and vocalist Sarcastic Sounds moved from selling beats on the Internet to producing a track for Lil Wayne and signing with Columbia. A blend of lo-fi hip-hop, emotional undercurrents, and pop hooks brought Sarcastic Sounds tens of millions of streams of singles like 2018's "I Don't Sleep" and his 2020 collaboration with Powfu and Rxseboy, "I'll Come Back for You." Sarcastic Sounds was born Jeremy Fedryk in 2000. By his early teens, he was learning music production and selling his instrumental compositions online under the moniker "Sarcastic Asshole." When he actually started making sales, he rethought the name and quickly changed it to Sarcastic Sounds. In 2017, he became enamored with lo-fi hip-hop and sample manipulation, applying this style to his earliest singles. Songs released in 2018 included "Jealousy," "I Can't Help," "I Don't Sleep," and the Frankie Cosmos-sampling track "Frankee," all of which were under two minutes and used a similarly melancholic melodic approach. That year, Fedryk also participated in a beatmaking competition that brought him to the attention of classic rap producer Mannie Fresh. A few months later, the two collaborated on music for a solid week, resulting in the beat that became "Mahogany" on Lil Wayne's 2020 album Funeral. Sarcastic Sounds' viral appeal continued to grow, with his tracks all racking up huge numbers of streams. He signed on with Columbia Records in 2020, and in addition to collaborations with Powfu and Sista Prod, he released several new songs of his own including "Scared of the World" and "Laugh." ~ Fred Thomas