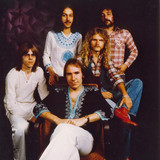 Orion is a French progressive rock band from Meaux, Seine-et-Marne. It is formed in 1975 by Patrick Wyrembski, Laurent Delenne and Janusz Tokarz.

The band is often cited by the foreign press as one of the most inventive French bands of the 1970s in the spirit of Ange, Camel, King Crimson, Pink Floyd or Genesis with its own style. Encouraged by warm reviews for their album "Mémoires du Temps", Orion is back on the front of the progressive rock scene in 2013. Next up are : La Face Visible (2015), Le Survivant (2017) and Virtual Human (2019). These three albums have received rave reviews.