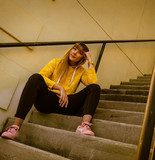 Songwriter, producer, and engineer Julie Slonecki is a multi-instrumentalist currently based in Charleston, SC. She’s been writing, recording, and performing music professionally for the last 6 years, building a catalogue of songs, unique soundscapes and beats. Earning a music composition degree in 2011, Julie is capable of writing for all genres and includes influences from funk to classical in her own sounds. While often writing in the pop genre, Slonecki strives to set her sound apart with unusual arrangements, unexpected chords, and thoughtful lyrics. She writes, performs, and produces all her own material in her home studio, usually with a glass of whiskey in hand. She has released several full length albums and EPs as a solo artist and with SLONE. “Apogee”, was released November 18, 2015. Her side project, “SLONE”, released a 7 song EP in 2018, featuring ‘Free From Me’. She’s living back in the pop world currently with her latest release, “Between the Lines”. Slonecki has opened for national acts and played in a variety of bands as front woman, bassist, and drummer, and is currently on tour with “Sexbruise?”