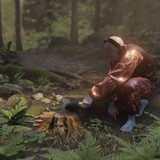 Murlo is the Manchester-based DJ, producer and visual artist breathing new life into the club experience. Known for a unique brand of intricate, colourful electronic music.   Murlo AV is just the latest chapter in a short but illustrious career for the Midlands-born artist. As a DJ, his pedigree is well-known – in 2014 he presented a series of shows on BBC 1Xtra, while his monthly residency on NTS Radio has become one of the jewels in the London station’s crown. Hugely popular on the club circuit, he’s already toured Asia twice, and North America three times.   As a producer, Murlo’s sound is unmistakeable. EPs with Unknown to the Unknown, Glacial Sound and Rinse led to him signing with Mixpak in 2014 – home to Popcaan, Palmistry and Dre Skull – where his three EPs have enjoyed widespread international acclaim.