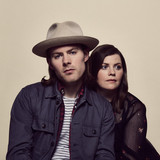 THE WELL PENNIES are a Folk/Pop duo consisting of husband and wife team, Bryan & Sarah Vanderpool. The pair met in Boston while supporting each other’s solo sets at folk venues around the New England area. They fell in love, ran away to California and released their debut self-titled EP that was met with critical acclaim from the Los Angeles music scene. Taking influence from 60’s & 70’s folk and pop icons like THE CARPENTERS, JAMES TAYLOR, & CAROLE KING, the pair combine their signature pop melodies and tight harmonies with beautifully produced lush arrangements. The band explains, “Our goal is to write songs that inspire something – however simple – to smile, to love, to get out and experience life.” A MOVE TO THE MIDWEST: After releasing this debut LP and 8 years in California, Bryan and Sarah relocated to DES MOINES, IA in order to “…escape the chaos and desperation of Los Angeles and move somewhere where artists can afford to be artists.”

The change allowed more time for writing, recording and touring and soon after, they joined DIANA KRALL’s Turn Up the Quiet world tour as the opening act in 2017. Their move to Des Moines also included the creation of Golden Bear Records and their home recording studio where the duo now records and produces their own music along with other projects. It was this transition and their travels around America’s heartland that inspired many of the songs in their new album, “Murmurations”, which was released on January 25th, 2019.