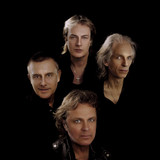 Pooling the talents of bassist/vocalist John Wetton, drummer Carl Palmer, keyboardist Geoff Downes and guitarist Steve Howe, Asia immediately became the epitome of supergroup of rock aristocracy and the natural heir to its members’ legendary bands of the 70s – King Crimson, Emerson Lake & Palmer, The Buggles and Yes. Expanding from their progressive roots, Asia embraced and dominated the vivid FM rock sound that dominated US airwaves during the early 1980s.

However, it would be the newly established cable TV phenomenon MTV that would revolutionize the music industry and bring ASIA along with its success.