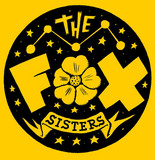 The Fox Sisters are a six piece party outfit that play original music influenced by American rhythm & blues of the 1960’s. The band formed in 2013 when long time friends and acquaintances, all veterans of the Rochester NY music scene, got together for kicks. It turned out to be a lot of fun for all involved and things took off from there. Before long they became known as the Flower City’s premier party starters and the go to band for dances, night clubs and backyard BBQ’s