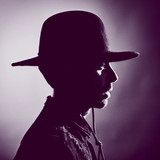 When John Milk emerged on the Soul Music scene in 2014, the revival movement has already reach its peak, Amy Winehouse being a legend already and Aloe Blacc and Mayer Hawthrone taking off with Stone Throw Records, from underground to mainstream. In this context, John Milk debut album stands out with a very sound of his own, inspired by Jamaican Soul music studios such as Studio One, Black Ark. This is, with mentors such as Lee Perry and Clement Coxsone Dodds, that John Milk composes and records his music, very much inspired by the Jamaican interpretations of the Northen American Rythm & Blues. This is how JM’s debut album “Treat Me Right” signed at Underdog Records becomes a success, followed by

a European Tour. Then comes “Paris Show Some Love”, his second album. Willing to widden his influences and avoid the copy-paste second album, John Milk releases a Hip-Hop, Funk and Electro influenced album, experimenting in all the black music directions he digs. The result is Rolling Stone Magazine recognizing it has something of the latest Childish Gambino releases. And here we are, Octobre 2021. After “Treat Me Right” in 2015, “Paris Show Some Love” in 2017, John Milk releases “Don’t Blame The Hammer”, composed, arranged and recorded by the milkman himself.