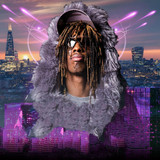 Rigormortiz is a U.K based Rapper, Singer and Producer. Aka the Kameleon due to his ability to adapt his style and flow to any genre of music. Originally a producer on the U.K Grime scene, he recently started working on his own upcoming mixtape, The Rigormortiz Project, which is shortly to be followed by several album releases. The albums are expected to be huge as they involve collaborations with other established superstars. As an advocate of spotting and supporting new talent, Rigormortiz is actively working with new up and coming artists and giving them a platform to showcase their talents to the world.