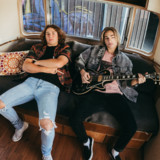 Orange County, CA-based band WHIT3 COLLR crafts a unique mix of retro influences with contemporary flair. Featured in Alternative Press (AltPress) Magazine’s “New Artists You Need to Hear” (May 2021), the band’s rock sound is a nod to greats like Van Halen and Guns N’ Roses, while their infectious hooks and melodies reveal modern influences such as KALEO, The Black Keys, and Greta Van Fleet (AltPress). WHIT3 COLLR's thrashing drums and gritty electric guitars combine with raw rock vocals that "are reminiscent of Ozzy Osbourne circa 1982" (Pancakes and Whiskey). According to California Rocker, "[t]heir original material is very hook-laden and catchy with bright, irresistible melodies." Friends since seventh grade, 17-year-olds Will Sawyer (lead vocals/guitar) and Donovan Hess (drums/backing vocals) regularly play iconic venues such as the Viper Room, Whisky a GoGo, and the Coach House. WHIT3 COLLR just wrapped up their debut album, and their singles have been featured on Spotify editorial playlists including, “Pure Rock and Roll” and “New Noise.” They won the August round of Danny Wimmer Presents' "Battle for the Big Stage" to play the Welcome to Rockville festival in Daytona Beach, FL in November 2021. Of their recent success, Sawyer shares, “We are making music and playing live because we love it, and we just want to project that energy onto our fans."