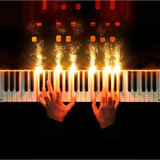 Noud van Harskamp has been playing piano covers of film music for over a decade. Hugely influenced and inspired by composers such as James Newton Howard, James Horner, Thomas Newman, Hans Zimmer, Christopher Young, John Powell and Bill Conti, he has created more than 350 videos for his YouTube channel, Juggernoud1, and has

attracted more than 10 million views. Ultimately his goal as a pianist and arranger is to promote film music in the best way he can.