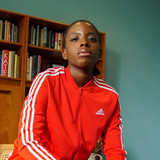 Shunaji is an avant-garde producer, rapper and singer hailing from Rome and currently based in London. She adopts experimental approaches to blend alternative hip-hop and trip-hop with jazz, neo-soul and a touch of mesmerising synth sounds. Shunaji’s releases have been acclaimed within independent music scenes in the UK and abroad, while she appeals to a growing audience and aims to push the boundaries of mainstream music. Shunaji has been releasing music independently since 2018, with her debut EP ‘Midnight Movie’ which was #1 on Jamz Supernova's EP of the Week (BBC 1XTRA). Since then, Shunaji has performed in the UK and internationally, including Glastonbury Festival, We Out Here, Love Supreme, Torstrassen Festival (Berlin) and OT301 (Amsterdam). Her latest EP, ‘Cosmic Blues’ (2020), was featured on Spotify’s editorial playlists “Fresh Finds” and “Fresh Finds: The Wave”. It also garnered College Music’s support and independent reviews on Reddit’s r/ListenToThis. During the COVID-19 pandemic, she has continued performing for audiences in virtual concerts, including We Out Here: Online & On Air and Sofar Sounds.