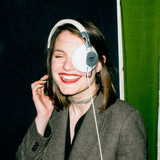 Sophia Kennedy announces her second record Monsters. The album will be released on City Slang on Friday 7th May. To celebrate the announcement, Kennedy shares a brand new single and follow up to “Orange Tic Tac” entitled “Cat On My Tongue”. Speaking about the new single she explains: “The song is a movie-like bold teenage rebel story - like the world of the Shangri-Las and Lovers-Rock combined with psychedelic Hip Hop - but to me, the real star of the song is the melody. It has this bright addictive Beam and it makes me feel good. It makes me feel so good, as if I’m sliding down the rainbow with no clothes on, while waving to tiny little angel babies.” Sophia Kennedy’s music sometimes sounds like a soundtrack to a world disintegrating, hanging on by a thread of memories, it combines the glamour and the morbid charm of tin pan alley show tunes from the 1960s or 70s and yet it fully embraces the deconstructed modernism of club music. Her new album Monsters, is full of plot twists, moments of prettiness dashed with paranoia. The title itself, is a self-ironic, comic-like commentary of being an artist trying to tame own creations like “monsters” gone wild but also a nod to a generally threatening tension in the world. Monsters is pop music teetering on the verge of ruin.