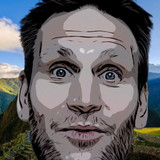 The music style of singer-songwriter, Nick Lexington, varies between rock, folk and indie pop. Nick Lexington began to write songs in the year 1991 and due to a lack of music Lo-Fi recordings were made. At the end of 2016, prompted by his fans, he began to produce his music in a professional setting with band arrangements. In the pieces of his resulting EP “Wellbeing” (2018) he facilitated various realms of feelings, that reflect the various aspects of personal development and don’t just draw on the evergreen theme of love. The music style of the following single, “Give Me a Kiss” (2019) is best described as a possible soundtrack for a road movie in the style of Quentin Tarantino. In the single „In The Flow” (2019), Nick mainly chose electronic sounds and beats to create a song that stirs you to shake your body. The song describes a flow state. “Sad Beautiful Girl“ (2020) is a rock ballad with a melodious tune. This is rounded off by Nick’s charismatic voice, powerful drums, and virtuoso electric guitar.

A rousing finale is created by the dynamic and long ending final part with guitar solo and atmospheric vocals. “Hey You“ (2021) is a groovy new rock tune with a catchy hook that lingers in the memory. This is rounded off by Nick’s charismatic voice, powerful drums, smooth bass, and driven electric guitars. The track systematically transitions to stripped-back sections that utilize a tom-based drum progression to support the prominent main vocal line.