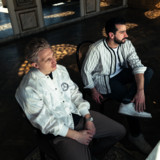 The Picard Brothers have been instrumental in shaping contemporary music over the past few years. The French duo’s songwriting and production credits reads like a who’s who of global icons - from Beyonce and Dua Lipa through to Mark Ronson, Major Lazer and Rudimental - but for now the focus is firmly on their own burgeoning musical project. Breathing fresh energy into French touch and soulful, golden-era house, their recent output follows a rich lineage of French dance music that can be traced back to Daft Punk, Laurent Garnier and Stardust. Rather than offering an imitation, the Picard Brothers have reimagined and revitalised classic sounds in a way that connects with the contemporary dance music space. “We think we owe it to a past era,” they explain. “But it’s not a basic tribute - it’s combined with another thing: feeling”.