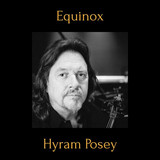 Introducing Hyram Posey He has played with many famous recording artists including Charlie Pride, Wynn Stewart, Marty Robbins and the 86 piece Tucson Symphony Orchestra. In 2011 Hyram moved to Nashville to pursue music full time. Working in a studio in Dickson TN, Hyram has composed movie soundtracks, radio show themes, and played on countless sessions in every genre. His current projects include a Bob Wills tribute band called the Swangers, a new instrumental release featuring his new age and jazz influenced music and he is a member of Lonnie Spiker’s band UnApologetically Honky Tonk and Lonnie Spiker- Up Close and Personal, a unique trio featuring the many talents of Hyram Posey. Hyram is not resting on his laurels either. In the past year he has won two "Instrumentalist of the Year" awards, one for the Academy of Western Artists and one for the coveted Josie Music Awards, THE largest and most respected independent music awards in the country.

He also won the "Instrumental Song of the Year" for his collaboration on the song- "Somewhere Else" in 2019 and he was recently inducted into the North West Western Swing Hall of Fame in Washington State. Let me introduce you to multi-award winning, Hall of Fame member, Hyram Posey