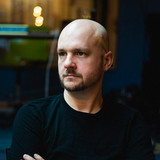 In Flowers Through Space is a conceptual album based on the Fibonacci sequence of numbers—a spiraling mathematical formula which is seen in flower petals throughout the natural world and has historically been associated with beauty. Using the recording studio as an instrument, the project is helmed by innovative New York City-based composer, producer and audio engineer E Scott Lindner, who challenges an ensemble cast of revered modern jazz and classical musicians to compose, improvise and interpret his cinematic visions. The result is an album that weaves together themes of mystery, nature and science, and takes form as equal parts celestial jazz journey and progressive classical music experience. “The Fibonacci sequence translates to the human brain as beauty,” says Lindner. “I thought it would be interesting to try and make a record that was entirely ‘Fibonaccized’—which is a word I made up—and see if it ended up being beautiful.”