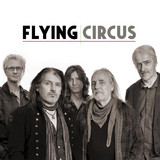 We were founded in 1990 in the German Rhineland town of Grevenbroich, and we draw our influences from the spheres of both progressive rock and hard rock. Up until now, we have released seven CDs: First, the albums Seasons (1997), Out of the Waste Land (2000), Pomp (2004) and Forth (2010), with the latter's release coinciding with our twentieth anniversary. To commemorate this fact, 'Forth' was also released as a deluxe edition containing a bonus CD with 13 re-recordings of our earliest compositions which were hitherto unavailable. After a line-up change in 2011/12, we released our first CD with our current line up (Michael Dorp on vocals, Michael Rick on guitar, Rüdiger Blömer on keyboards and violin, Roger Weitz on bass and Ande Roderigo on drums), an EP called 'Ones and Zeros', in 2013. In 2016, we followed this up with our fifth regular album - a concept work which tells the story of a ficticious band of the late 1960s and which is accompanied by a bonus CD/DVD pack called "25 LIVE" documenting our 25th anniversary concert. March 2020 saw the release of "1968", which is another concept album, setting numerous events of that momentous year to music. Right now, we have just released a "best of" album with one brand new song and many re-recordings of older songs

and some remixes of songs by the current line-up. We are now working on new songs and a complete re-recording of our debut album which will see its 25th anniversary next year.