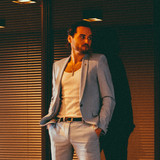 OLLIE WRIDE, is an English singer/songwriter fusing innovative elements of modern alternative pop with the nostalgic hallmarks of synthwave. The artist found a platform to hone his unique blend of songwriting and showmanship working with San Francisco based producer FM-84, penning some of synthwave's most popular tracks including "Running in The Night" and "Never Stop", leading to 2 North American sold out tours in 2018 / 2019. Following this popular collaboration, provided an opportunity for Wride to explore a more personal approach utilising his melodic sensibilities and character driven lyrics, quickly attracting a new audience with the release of his debut solo album, "Thanks in Advance” on NRW Records. Widely praised by fans, the album became their fastest selling debut record to date, charting on Billboards Top 10 Electronic charts as well as iTunes' Electronic charts. It also enjoyed critical accolades; NewRetroWave named the debut record number one on their list of the Top 10 Albums of 2019. Culminating with a sold out headline debut show in London at the end of 2019. In 2020 the deluxe repress was released, comprised of bonus tracks and remixes from producers including Sunglasses Kid, LifeLike and Anoraak. Tracks were also featured on Netflix: To The Beat! Back 2 School, Channel 4: Made in Chelsea. Ollie Wride is now working on his highly anticipated second album.