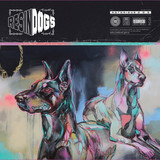 Australia's Resin Dogs are a loose collective, a cut and paste sample band who use live drums, live bass, and elements of hip hop via turntables and samplers to create all forms of ritual dance sounds. They don't stick to one music genre. The members of Resin Dogs come to the band in 1997 with a wealth of experience behind them in the Brisbane music scene. Since coming together as Resin Dogs, the four members continue to work on individual projects. As the Resin Dogs, they emerged with the singles "Grinnin/What You Need" and "From the Volcanic Lab" which established the group as one of Australia's finest exponents of the hip hop/ritual dance culture, while giving a nod in the direction of Brit bands like Pop Will Eat Itself and Jesus Jones. The nature of Australian music demands live gigging and almost from the start of their performing career, Resin Dogs have played to packed houses. Their second-only performance required them to deliver two shows to satisfy the demand. Forming the record label Hydrofunk as a way of getting their music out to people, Dave Atkins and DJ Katch traveled to London to get several hundred records pressed for sale at their already crowded live shows. The reaction to their sounds in London reassured the Brisbane band that they were doing something very original. The Hydrofunk label still acts as a collective home for the band members' numerous side projects although the band has moved to EMI for its own recordings. Resin Dogs apply two separate philosophies to their music: one for the live environment and another for their forays in the studio. The link is the four players and their interest in combining different styles of music. For live events, the four core members are joined by various co-conspirators, including percussionists, breakdancers, and visual contributors. Their video clips mimic Resin Dogs' cut'n'paste music style. The first album, August 2000's Grand Theft Audio became a mainstream Australian chart entry. ~ Ed Nimmervoll, Rovi