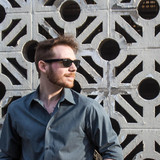 Jory Avner is a singer-songwriter based out of Chicago, Illinois. By blending highly stylized lyricism and guitar with synth/rock soundscapes, he strives to create an atmosphere that is both deeply textured, thought-provoking, introspective, and yet succinct in terms of narratives. “By far the words are what I focus on the most when it comes to writing or listening to a song… I guess I hope people walk away from my songs with their mind sort of activated, and in the best case scenario maybe feel a little moved. I always love when songs do that for me.” ~Jory Avner, Voyage Chicago Magazine ​ Writing and performing music for over ten years, Jory has headlined shows across the United States and Canada, and continues to play in and around the Greater Chicago area. His third studio album, 'Far and Away,' was released March 9th, 2018 with live performances on Radio DePaul, WZRD 88.3FM Chicago, and WRSE 88.7FM The Underbelly Hours.