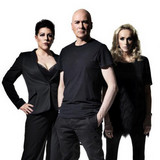 Synth pop's first international superstars, the Human League were among the earliest and most innovative bands to break into the pop mainstream on a wave of synthesizers and electronic rhythms, their marriage of infectious melodies and state-of-the-art technology proving enormously influential on countless acts following in their wake. The group was formed in Sheffield, England in 1977 by synth players Martyn Ware and Ian Marsh, who'd previously teamed as the duo Dead Daughters. Following a brief tenure as the Future, a period during which they added and lost synthesizer player Adi Newton and enlisted vocalist Philip Oakey, they rechristened themselves the Human League. The trio recorded a demo and played their first live dates. The slide presentations of "director of visuals" Adrian Wright quickly became a key component of their performances. After they signed with the indie label Fast, the Human League issued their first single, "Being Boiled," in 1978. A minor underground hit, it was followed by a tour in support of Siouxsie & the Banshees. After a 1979 EP, the instrumental The Dignity of Labour, the group released its first full-length effort, Reproduction, a dark, dense work influenced largely by Kraftwerk. Travelogue followed the next year and reached the U.K. Top 20. Still, internal tensions forced Ware and Marsh to quit the group in late 1980, at which time they formed Heaven 17. Their departure forced Wright to learn to play the synthesizer; at the same time, Oakey recruited bassist Ian Burden as well as a pair of teenagers, Susanne Sulley and Joanne Catherall, to handle additional vocal duties. The first single from the revamped Human League, 1981's "Boys and Girls," reached the British Top 50. Recorded with producer Martin Rushent, the slicker follow-up "Sound of the Crowd" fell just shy of the Top Ten. Their next single, "Love Action," reached number three, and after adding ex-Rezillo Jo Callis, the League issued "Open Your Heart," another hit. Still, their true breakthrough was "Don't You Want Me." The classic single, as well as parent album Dare!, both topped their respective charts in England, and went on to become major hits in the U.S. as well. A tour of the States followed, but new music was extremely slow in forthcoming. After a Rushent remix disc, Love and Dancing, the Human League finally issued 1983's Fascination! EP and scored a pair of hits with "Mirror Man" and "(Keep Feeling) Fascination." The much-anticipated full-length Hysteria finally surfaced in mid-1984, heralding a more forceful sound than earlier Human League releases. The record failed to match the massive success of Dare!, however, with the single "The Lebanon" earning insignificant airplay. The group soon went on indefinite hiatus, and Oakey recorded a 1985 solo LP with famed producer Giorgio Moroder titled simply Philip Oakey & Giorgio Moroder. To the surprise of many, the Human League resurfaced in 1986 with Crash, produced by the duo of Jimmy Jam and Terry Lewis. The plaintive lead single "Human" soon topped the U.S. charts, but the group didn't capitalize on the comeback success and disappeared from the charts for the remainder of the decade. When the Human League finally returned in 1990 with Romantic?, their commercial momentum had again dissipated. The single "Heart Like a Wheel" barely managed to rise into the Top 40. The record was the band's last with longtime label Virgin. As a trio consisting of Oakey, Sulley, and Catherall, they ultimately signed with the EastWest label and teamed with producer Ian Stanley for 1995's Octopus. The album went largely unnoticed both at home and overseas, with the single "Stay with Me Tonight" issued solely in the U.K. A resurgent interest in synth pop and post-punk during the early 2000s enabled the group's 2001 album Secrets, which saw the group update its early sound, considerable press coverage. In 2002, previously unreleased recordings of the Future and the embryonic Human League were compiled for The Golden Hour of the Future. Steady touring continued for several years, as documented on Live at the Dome. Additionally, there were performances of Dare! in its entirety and a Steel City Tour with Heaven 17 and fellow Sheffield natives ABC. The Human League remained connected to their local roots in the studio as well. Credo, released in 2011, was produced by fellow Sheffield natives I Monster. The career-spanning anthology A Very British Synthesizer Group was issued five years later, promoted with performance dates across Europe. ~ Jason Ankeny, Rovi