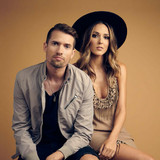 Rooted in stunning harmonies and sharp songwriting, SmithField is a modern country duo inspired by one of the genre's classic traditions: the male-female duet. SmithField formed in 2011, drawing not only upon the family history that bound Jennifer and Trey together, but also the musical influences that set them apart. From the start, SmithField's music was a unique mix of the contemporary and the classic, blurring the boundaries between country, pop, and rock. There's no lead singer in SmithField. No main songwriter, either. Instead, Jennifer and Trey split those duties equally, writing harmony-filled songs that explore love, loss, and life from both sides of a relationship. The two moved to Nashville in 2012, eager to carry the torch for country music's rich legacy of male-female duets into the 21st century. It was there — in the same city that inspired classic collaborations between Dolly Parton and Porter Wagoner; Tim McGraw and Faith Hill; and Loretta Lynn and Conway Twitty — that SmithField fine-tuned their own brand of platonic chemistry. Songs like "Hey Whiskey" and "If It Ain't You" rewarded the independent duo with major-label-sized success, including multiple appearances at the Grand Ole Opry, heavy airplay on satellite radio, 40 million digital streams, acclaim from Rolling Stone, and shows with fellow genre-bending country artists like Brothers Osborne, Scotty McCreery, and Old Dominion.