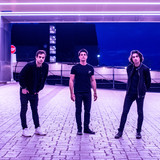 Great bands typically have a calling card, an indelible thing that captures their essence while setting them apart from everybody else. Ferraro has three which, taken together, make the fast-rising alt-rockers unique and kind of magic. First, they are brothers who have made music together their entire lives. Also, their family owns and operates a legendary live music venue in hometown Toronto where they have played and practiced a lot. And Ferraro is a trio which any music nerd can tell you is the most vibrant configuration in rock. Seriously, Google it. Not surprisingly then, in the lead-up to their dazzling debut EP, Sweet Fever, guitarist Cosmo Ferraro, singer/bassist Natale “Tally” Ferraro and drummer Gianni Ferraro attracted collaborations with a diverse list of Can-rock stars keen to explore the outer limits of the trio’s sprawling pop talents. Take the anthemic new single “I’ll Always Be There,” co-written by Ferraro with Mother Mother’s Ryan Guldemond and boasting a chorus so gigantic that it takes what sounds like a small army of vocalists to wrangle it. At the other end of the spectrum is “Running Away,” co-written around 2017 with Dragonette’s Joel Stouffer, and a sonic mind-melt perhaps best described as a winding, spaghetti western-tinted rock scorcher.