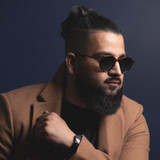 Rehan Dalal was born in Bombay, India, and raised on a steady diet of Jazz and R&B music. Now based out of Toronto, Canada he's found a change of scenery, but his appetite for the music he grew up on is unchanged. In June of 2013 he released his first full-length album “Got to Feel It” — a collection of songs that touch upon a range of styles but remain firmly rooted in a retro-soul aesthetic that pays homage to the classic Motown sound. November of 2014 saw the release of his follow-up EP “This Too Shall Pass” which harkens back to his early days as a solo performer. Most of the songs feature nothing more than his voice and guitar — allowing his songwriting and guitar playing to take focus. 2021 will see the release of his next album “Fruit of a Poison Tree”. This is Rehan's most ambitious effort yet: a 15-track Progressive R&B concept piece produced by Justin Abedin (jackSOUL). It draws from his love of Neo-Soul and Jazz and features contributions from an all-star cast of musicians including Nate Smith, Charlie Hunter, and Larnell Lewis; as well as a host of notable up-and-comers such as JP Saxe, Julian “J3PO” Pollack, and Joanna Majoko to name just a few.