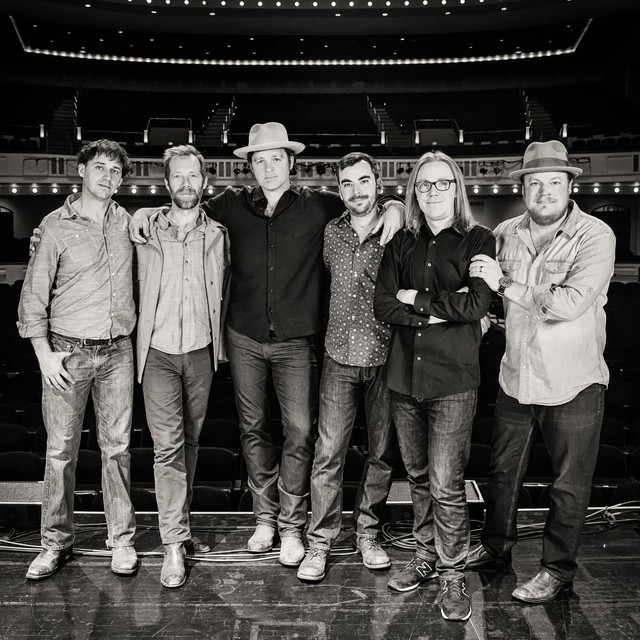 Although they received a boost in popularity when actor/banjo player Steve Martin began collaborating with the group in 2009, North Carolina's Steep Canyon Rangers had already earned an audience with their progressive bluegrass sound. Beginning with 2001's Old Dreams and New Dreams, the band established itself as one of the more innovative old-timey bluegrass units of the day. After winning a slew of International Bluegrass Music Association awards, they earned their first Grammy nomination in 2011 for the Steve Martin & Steep Canyon Rangers LP Rare Bird Alert and took home the award in 2012 for the album Nobody Knows You. They continued to push against the boundaries of the genre into the next decade, teaming up with Boyz II Men on 2020's bluegrass, soul, and R&B mash-up Be Still Moses. Graham Sharp (banjo, harmony vocals) met future bandmates Woody Platt (guitar, lead vocals) and Charles R. Humphrey III (bass, harmony vocals) in 1999, while all three were attending the University of North Carolina in Chapel Hill. Drawn together by their love of acoustic music, they began playing impromptu jam sessions. As things progressed, they were drawn more and more to bluegrass and started learning the genre's classic tunes. The main impetus to "go bluegrass" was the input of mandolin player Mike Guggino, an old friend of Platt's. He also owned a cabin in the mountains near the school, and the quartet used that as their rehearsal space. At first, the members were all busy with school and planning professional careers, with no thought of making music full-time. None of them had ever been in a band before, but as they created a style all their own -- equal parts traditional and progressive bluegrass, with a bit of country and rock thrown into the mix -- they began to realize they were more than just a bunch of friends jamming. By the time they graduated, fiddler Nicky Sanders had also joined the band's ranks, and the Steep Canyon Rangers were getting enough gigs to quit their day jobs and become full-time musicians. Although they threw the occasional bluegrass cover into their sets, the main strength of the Rangers quickly became their songwriting. Sharp, Humphrey, and Guggino all contributed to the band's canon with original compositions that appealed to bluegrass, country, folk, blues, and jam band fans. Upon graduation, the Rangers hit the road, playing folk and rock clubs as well as traditional bluegrass venues. Their first album, Old Dreams and New Dreams, was released in 2001 of the band's own label. Mr. Taylor's New Home appeared in 2002 courtesy of the small indie label Bonfire, and the self-titled Steep Canyon Rangers marked the band's first release for Rebel in 2004. Its follow-up, One Dime at a Time, was recorded mostly live in the studio and won the IBMA's Emerging Artist Award in 2006, with the title tune going to number one on the Bluegrass Unlimited chart. Although no stranger to the jam band crowd, the Steep Canyon Rangers further endeared themselves to that audience with a ragtime cover of the Grateful Dead's "Don't Ease Me In." The song appeared on Lovin' Pretty Women, which was nominated for IBMA's Album of the Year, and 2009's Deep in the Shade showed off their continuing love of gospel music. Meanwhile, the bandmates kept themselves busy collaborating with other artists. In 2008, they played with Flatt & Scruggs vocalist Curly Seckler, and in 2009 comedian/banjo player Steve Martin asked the Rangers to serve as his backing band on a tour in support of his own banjo album, The Crow: New Songs for the Five-String Banjo. Their 2009 gig at San Francisco's Hardly Strictly Bluegrass Festival introduced the group to a whole new audience of former hippies and boomers, and Martin remained on board for 2011's Rare Bird Alert, which featured guest appearances by Paul McCartney and the Dixie Chicks. Nobody Knows You, the group's debut album for Rounder Records, appeared in 2012. Tell the Ones I Love from 2013, also on Rounder Records, was produced by Larry Campbell and recorded mostly live at the late Levon Helm's studio in Woodstock, New York. With their popularity growing, the Steep Canyon Rangers toured steadily, both on their own and accompanying Martin. In 2013, Martin collaborated with singer and songwriter Edie Brickell on an album called Love Has Come for You; when Martin and Brickell played a handful of concert dates in support, the Steep Canyon Rangers joined them, and one performance was released in both audio and video under the title Steve Martin and the Steep Canyon Rangers featuring Edie Brickell Live. In 2015, the Steep Canyon Rangers released their ninth album, Radio; produced by bluegrass legend Jerry Douglas, it was the Rangers' first set to feature their new sixth member, percussionist Mike Ashworth. Martin's second studio collaboration with the Steep Canyon Rangers, titled Long-Awaited Album, arrived in September 2017, followed in 2018 by the Joe Henry-produced Out in the Open, the group's tenth studio long player. Recorded live at Merlefest 2019, North Carolina Songbook saw the group tackle an eclectic set of songs by famous Carolinians like Ola Belle Reed and Thelonious Monk, while 2020's Be Still Moses merged bluegrass and soul with help from the Asheville Symphony and New Jack Swing heroes Boyz II Men. ~ j. poet, Rovi