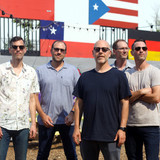 Lotus has always been difficult to define musically. An instrumental jamband that stayed away from the goofy and gimmicky, they have favored groove-based improvisation instead of gaudy solos and noodling. Influences of classic electronic dance music, funk, post-rock and dance-rock have all made their way into the Lotus sound. Over the years, their unique musical blend of electronica with jam music has helped forge a new path in the jamband landscape, influencing many younger bands in the scene. The long-running quintet have returned in 2020 with Free Swim, their new studio album out independently August 21st, which pays homage to the greats of music’s past, built on the bones of what the five members of Lotus listen to and have absorbed over time. In similar fashion to the old-school way of making mixtapes on cassette, where the best always managed to surprise with each new song while still sharing a similar DNA, the 10 songs on Free Swim are not boxed in by any genre or tonal palette, but the shared molecular grid is joy and wonder. It’s an eclectic and groovy instrumental mix of funk, disco, jazz and psychedelia, packed with catchy melodies and killer grooves looking to bring happiness to listeners.