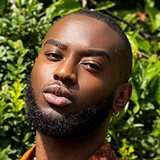 Kojoe Simon presents with Coming Home his debut single. The singer, producer & choir director has now found his musical path after a long musical career. With the support of producer Bodry Johnson, Kojoe shows what he really wants. As a true fighter, with his roots in Ghana, there is no hurdle he cannot overcome. Like with his slogan "One Love & God bless" he wants to give people love and strength in these difficult times through his music. Coming Home was released in the middle of the year and is a track that shows how the upcoming album will sound.