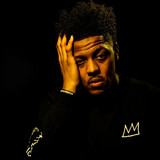 Descendent is a champion of black culture, at home and abroad. Through songwriting and filmmaking, the New York-based artist seeks to illuminate and celebrate the cultural strength of the Pan-African diaspora, specifically of African American art. Starting from his hometown of Newport News, Virginia, he dives into the roots of African American storytelling: music and oral history. They become his vehicle to not only remember the history of his ancestors but also connect with the communities around him. He believes that through history, African Americans can liberate themselves creatively and financially. And furthermore, that it can relate to African people worldwide. He follows in the footsteps of his Hip-Hop forefathers. Both musicians such as Mos Def and Tupac, but also directors like John Singleton and Spike Lee. He invites you to join him on this journey. He has toured numerous times across the United States and his work has brought him to the likes of Sway in the Morning "A&R Room" Segment, A3C Festival, Empire State Music Festival, and Chuck D’s two radio shows "And You Don't Stop" and "Songs That Mean Something”. He regularly performs at mainstay NYC venues such as SOBs, The Shrine, Bowery Electric, Rockwood Music Hall, The Well [Brooklyn,NY].