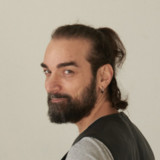 Valerio Vaiarelli is a London-based songwriter and multi-instrumentalist. He plays an eclectic mix of rock, reggae, pop, funk, and blues music and has released two studio albums. A charismatic frontman as well as an accomplished sideman, since 1995 he has regularly played concerts, TV shows, musicals and plays. A graduate of University of West London and Palermo Conservatory of Music, he has been a committed music tutor and supporter of several youth music associations for more than 20 years.