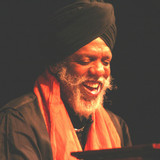 Organist Lonnie Smith has often been confused with keyboardist/pianist Lonnie Liston Smith -- and, in fact, more than a few retailers have wrongly assumed that they're one and the same. In the mid-'60s, the Hammond hero earned recognition for his membership in George Benson's classic quartet before going on to play with Lou Donaldson (contributing some memorable solos to the alto saxman's hit 1967 album Alligator Bogaloo) and recording enjoyable dates of his own for Blue Note. For all their accessibility and commercial appeal, funk-influenced Smith sessions like 1968's Think and 1970's Drives showed that he could be quite imaginative. Smith, who later became Dr. Lonnie Smith (for "no particular reason," the same reason he gives for why he always wears a traditional Sikh turban), remained an inspired representative of soul-jazz, releasing his own albums like 1993's Afro Blue and continuing his long association with Donaldson. The 21st century saw him step up the pace, releasing several albums, including a tribute to Beck, 2003's Boogaloo to Beck; an album of reworked and modernized jazz standards, 2006's Jungle Soul; and 2009's Rise Up! Smith and his trio members -- Jonathan Kreisberg, guitar; Jamire Williams, drums -- continued a relentless and tireless touring and recording schedule; he issued Spiral in 2010 on Palmetto with Matt Balitsaris producing, followed by the live album Healer in 2012. In 2016, Smith delivered Evolution, his first album for Blue Note since 1970's Drives. Produced by Don Was, it featured guest appearances from saxophonist Joe Lovano, pianist Robert Glasper, and others. Smith enlisted Was as a producer again, this time for a trio date entitled All in My Mind. Released in January of 2018, the set included two originals, a cover of Paul Simon's "50 Ways to Leave Your Lover" (featuring guest vocalist Alicia Olatuja), Wayne Shorter's "Juju," and Tadd Dameron's "On a Misty Night" in its track list. ~ Alex Henderson, Rovi