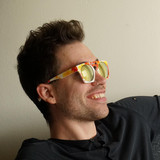 Daniel Andress Sanchez (aka Danny Andress) is a L.A. based keyboardist, electronic music producer, and educator. His primary musical interests are in jazz and electronic music (downtempo, ambient, minimal, glitch, IDM). He grew up moving around in the South and Southwest US, finally settling in Southern California as a teenager. Once living in California, he started teaching himself how to play the piano by studying a chord encyclopedia, and joining high school bands, before going to college to pursue music further. In 2013 he received his MFA in Music from UC Irvine on scholarship, and his BA in Music from UC San Diego in 2011, being awarded academic and merit based scholarships for music. He has worked as a keyboardist and music director in several projects, and teaches private students from his studio.