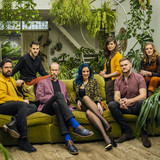 A French vocal group famed for tackling all manner of classical material (Baroque, fugues, madrigals, orchestral overtures) and switching them to an a cappella swing setting, the Swingle Singers was formed in Paris during the early '60s by American expatriate Ward Swingle. By the time of their 1963 album debut, the group comprised eight voices -- Swingle, Christiane Legrand (sister of Michel), Jean-Claude Briodin, Anne Germain, Claude Germaine, Jean Cussac, Claudine Meunier and Jeanette Baucomont. That album, Jazz Sebastian Bach (titled Bach's Greatest Hits in America), earned the group a Grammy award and almost made the Top Ten. The novelty inherent in an eight-voice scatting choir resulted in dozens of television and radio appearances around the world during the mid-'60s. Somehow, the group also managed to record follow-up LPs Going Baroque in 1964 and Anyone for Mozart? one year later. Both were Grammy winners as well -- though Best Performance by a Chorus definitely wasn't the most competitive category at the awards ceremony. In an era when vocal choruses increasingly slipped down the easy listening slope, however, the Swingle Singers moved in precisely the opposite direction. In 1969, a subsidiary group called Swingles II premiered Sinfonia, a composition by the avant-garde composer Luciano Berio that also utilized the New York Philharmonic. After a move to England in 1973, Ward Swingle recruited a new Swingle Singers and changed musical direction, incorporating material from the avant-garde as well as the Renaissance era and jazz. Swingle himself retired from active performance in 1984, but continued on as music director. The group continued to tour the world into the '90s, performing operas by Azio Corghi and Berio, appearing in compositions with ballet companies, and holding various classes and workshops as well. ~ John Bush, Rovi