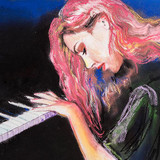 Dalal Bruchmann was born in Austria on Walpurgisnight with a natural proclivity for music. Her ancestor was the lyricist for renowned composer Franz Schubert, and she began composing her own music at age ﬁve. Dalal started playing piano and violin at age four and by her grammar school years, was a soloist for the Vienna International Gospel Choir and a violinist with the Vienna University Orchestra. Her theatrical career took her to stages in Vienna, Munich and Berlin where she held lead roles in performances of “Cats,” “Starlight Express” and “Elisabeth.” In 2011/12, when she began her musical career in the United States, she topped the Billboard Breakout Charts (#5) in the US and the UK Pop Commercial (#8) and Dance Charts (#7). After a successful East Coast tour Dalal began to put her love for classical music on paper and started to compose for orchestras for various live art shows. Dalal has performed at the House of Blues, The LA Convention Center, The Waldorf Astoria, NY Fashion Week, The Microsoft Theater, various Radio and Live TV shows, Red Bull/Servus TV, the BMI Acoustic Sessions, and opened the Barbados Music Festival, Classical/Pops (2016).   Dalal is currently the solo artist for six singles by renowned composer Ludovico Einaudi for Warner Classics. An Album titled the 50 GREATEST EINAUDI PIECES was released in October, 2018. As a composer herself, Dalal was recently nominated for a Hollywood Music in Media Award for her debut classical record “The Quiet Heart."