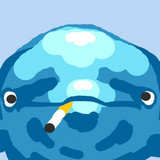 Space Surimi is the union of MC Eddie Coopermen and producer Carlboro. His world is full of visual imagery and referring to the Internet and digital consumerism, from videogames and their virtual scenarios to the products that marked his generation. They produce a fresh and irreverent Rap, halfway between the primitive Electro of Egyptian Lover, Neucleus or the mainstream format of Snap! or Vanilla Ice from his headquarters in Spain. They are part of the new and diverse generation of urban music that has been growing for years in Andalusia, exploiting a character and formulating a proposal that smells like old school and maintains its own identity.