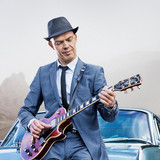 Thorbjørn Risager is a Danish blues musician who first came onto the scene early in the 2000s. A fan of Southern soul and Chicago blues, he fused the two sounds, something that was evident his 2004 debut Live 2004. This record also showcased the skills of Black Tornado, a group he assembled in 2003 to articulate his artistic vision. Risager and Black Tornado signed to Cope Records, an imprint run by the band's trumpet player, in the mid-2000s and from that point on, Risager worked regularly -- albums appeared every other year, and he toured often -- and he started to get international attention in 2014 after the release of Too Many Roads. This was the band's first effort to appear on Ruf Records but it wasn't their last -- Songs from the Road followed in 2016, Change My Game appeared in 2017 and Come On In in early 2020 ~ Stephen Thomas Erlewine, Rovi