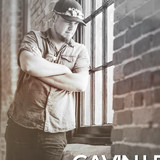 Since his arrival to Nashville, Tennessee in 2017, Gavin has released five singles – Old Chevy, Gone Fishin’, Dixie Dreamin’ and Millionaire in Mexico, Friend With A Beer in March 2021, American Crazy in July 2021,(Which has broke the Top 100 on the Music Row chart and is still trending upwards) and now his current release, The Beginning of Me.

Gavin’s sound has been influenced by traditional 90’s country artists, and with his down-home, dirt-roads and hardworking man identity, coupled with a big heart and endearing smile has gained Gavin an enormous grassroots following.