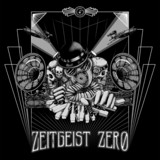 Industrial goth fused with powerful vocals and gritty electronics. Zeitgeist Zero is an independent Leeds based band that has toured throughout the UK and Europe. Their sound is a combination of heavy guitars and industrial electronics and their unique music and dark style have received favourable press coverage, including BBC Radio 6, Sonic Seducer and Devolution. The band has built up a loyal following leading to festival appearances at Infest, Wave Gotik Treffen and Whitby Goth Weekend. The band has worked with top music producers such as Steve Whitfield (The Cure), John Fryer (NIN) and John Rivers (The Specials). Their three albums and EP have met with international critical acclaim. ‘Dead To The World’ and ‘The Blackout’ were both voted “Album of the Month” by popular German music magazine Dark Spy. Their latest album Ghosts of Victory was mixed by legendary producer Steve Whitfield (The Cure). Zeitgeist Zero were recently invited to play alongside Peter Hook and The Light at Infest Festival’s 20th anniversary on their Best Of British night. These unique and creative musicians are currently working on their fourth album.